All-in-all, the economy has seen a strong bounce back since the 2008/2009 recession.

With such a strong performance over the past decade, there are fears in the air about a looming correction. And everyone who was investing in 2008/2009 knows firsthand the effects a correction/downturn has on real estate.

The economy is a complex animal that is nearly impossible to predict. However, by studying the impacts of economic corrections on real estate in the past, you can have an idea of how real estate will be impacted by any correction in the future– big or small, in the next few months or the next few years.

One major fact that will encourage you about the impact a potential economic correction will have on the multifamily industry is that renting has increased as the economy has gotten better.

Say what? There are more renters even when the economy has gotten stronger?!

One of the most telling statistics is the increase in the number of renters during the past decade. Between 2006 and 2016, the US population grew by 23.7 million. During that time, the number of renters increased by over 23 million and the number of home owners increased by less than 700,000. In relative terms, the overall renter population grew by more than 25% in a decade. In fact, according to Pew Research Center, more U.S. households are renting than at any point in the last 50 years!

Sure, a large portion of this growth occurred immediately following the economic recession (an increase of 1.4%, 3.1% and 4.4% in 2007, 2008, and 2009), which is expected. The economy tanks and people cannot afford nor qualify for a mortgage, so they are forced to rent.

And a lot of this growth has been concentrated in big cities across the US (population greater than 200,000).

That said, the number of overall owners in the US still exceeds the number of renters (63.8% owners to 36.2% renters). However, the gap is closing. Because the number of big cities where more than 50% of the population choses to rent increased from 20% to nearly 50% during that same period. In other words, more and more people are choosing to rent over buying in big cities.

Additionally, renter growth outpaced homeownership in 97 of the 100 largest cities in nearly every year between 2006 and 2016. That means that the number of owners grew at a faster pace than the number of renters in only 3 major cities across the county.

Even more staggering, during a robust economy in 2015 and 2016, rent growth outpaced homeownership in 46 of these major cities!

Okay, more people are renting now, but they plan on buying a home eventually, right?

Because of the turnaround we saw in the economy, you might think people would move out of their rental and into their own home. But, only 14% of renters expected to move within a year while 37% said they didn’t know and another 9% said they expected to never move. But what was even more shocking was this – only 41% expected to buy, which is the lowest it has ever been.

Another interesting fact is that 55% said they either strongly agree/somewhat agree with the statement “I like where I live and don’t plan to move despite the changes in my rent.” And only 31% said they would move into a different rental property if their rent increased in the next year. 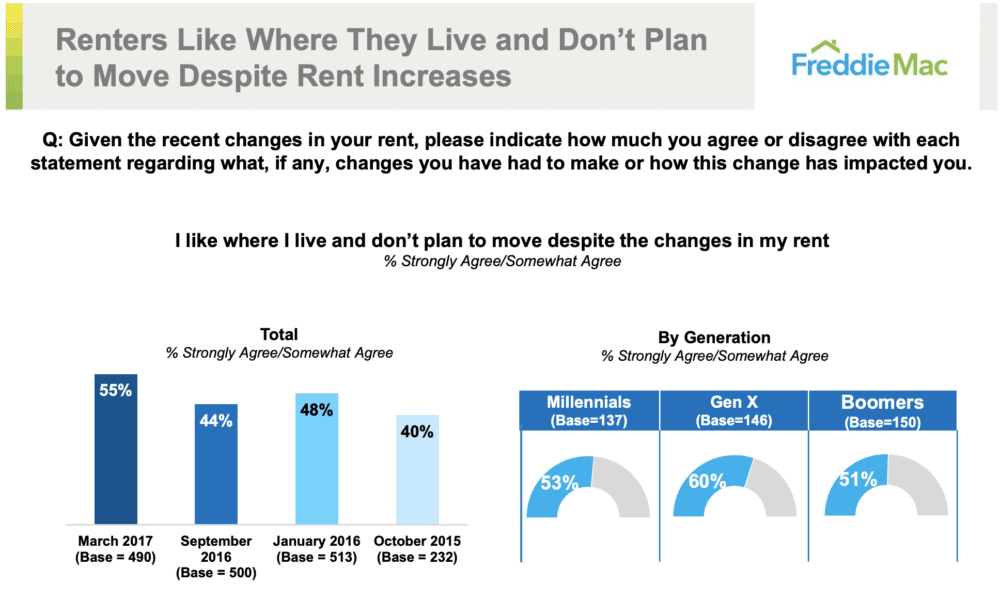 Now the question is why did more people decide to rent while the economy was booming?

Well, there are many reasons, including:

All of these reasons will be with us for the immediate future.

That said, you want to always make sure you are adhering to my Three Immutable Laws of Real Estate Investing to maximize your real estate portfolio during any part of the market cycle.

Are you an accredited investor who is interested in passively investing in an apartment community?