A little more than a year before the onset of the coronavirus pandemic, I wrote a blog post entitled “Why I Am Confident Multifamily Will Thrive During and After the Next Economic Correction” (which you can read here).

The economy was experiencing a record long expansion and showed no signs of stopping. However, like most economic expansions, various economic and real estate experts were warning about an impending recession.

“The stock market is inflated” and “real estate prices and rents will not increase forever” they said.

However, whether the economy continued chugging along or experienced a minor or massive correction, I was confident is multifamily real estate’s ability to continue to perform.

My confidence was not emotionally driven or biased because I am a multifamily investor. It was based on my analysis of the facts. The most telling fact was the change in renter population.

Historically, more people rent during recessions (which is one of the reasons why I was attracted to multifamily in the first place) and more people buy during economic expansions. The former held true for the 2008 recession as more people began to rent. However, during the post-2008 economic expansion, the portion of renters continued to increase (more US households were renting in 2016 than at any point in 50 years).

Therefore, I predicted that the portion of renters would increase or, at minimum, remain the same during and after the next correction.

Then, coronavirus hit and induced an economic correction (or a temporary slowdown, depending on who you ask).

But, sure enough, a study published on June 17th, 2020 projected a decline in homeownership and concluded that  “the demand for rental housing will increase somewhere between 33% and 49%” between 2020 and 2025.

In both my January 2019 article and the June 2020 study, one of the reasons why more people are renting is due to tightened lending standards (other reasons were student loan debt, inability to make a down payment, poor credit, and people starting families later).

A metric that is used to measure lending standards is the Mortgage Credit Availability Index (MCAI). The MCAI is based on a benchmark of 100 set in March of 2012 and is the only standardized quantitative index that solely focuses on mortgage credit. A decline in the MCAI indicates that lending standards are tightening while an increase in the index are indicative of loosening credit.

Between December 2012 and November 2019, the MCAI was steadily trending in the positive direction, increasing from the high-80s to the high-180s. 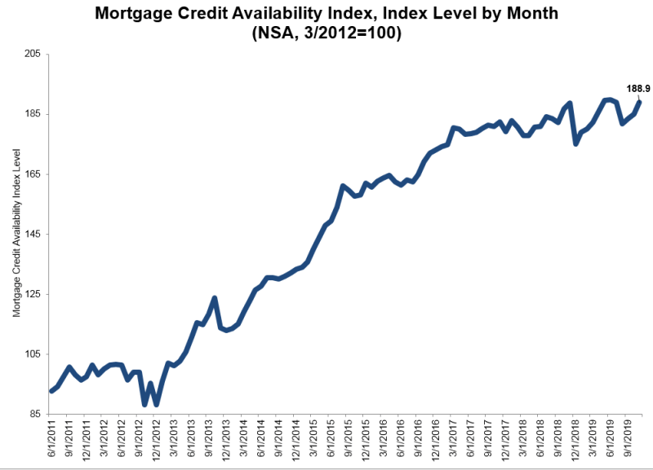 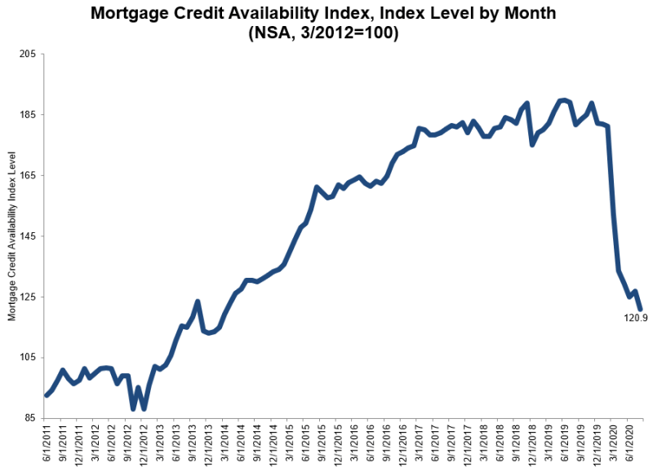 Joel Kan, Mortgage Bankers Association’s Associate Vice President of Economic and Industry Forecasting said in the August 2020 report, “credit continues to tighten because of uncertainty still looming around the health of the job market, even as other data on loan applications and home sales shows a sharp rebound. A further reduction in loan programs with low credit scores, high LTVs, and reduced documentation requirements also continued to drive the overall decline in credit availability.”

People will always need a place to live. Their only two options are to rent or to own. As indicated by the massive MCAI declines since the end of 2019, less and less people will be able to qualify for residential mortgages. The programs available to people with low credit or who cannot afford a high down payment have disappeared.

Therefore, by default, more people will be forced to rent.

One last interesting thing to point out is how the MCAI during the current economic predicament compares to the 2008 recession.

Here is an expanded MCAI graph that shows credit availability back to 2004. The pre-2011 data was generated biannually, making it less accurate than the post-2011 monthly generated data. However, the graph still highlights an important point. At least as it relates to the availability of credit at the time of this blog post, the current economic recession is nowhere near as severe as the 2008 recession. 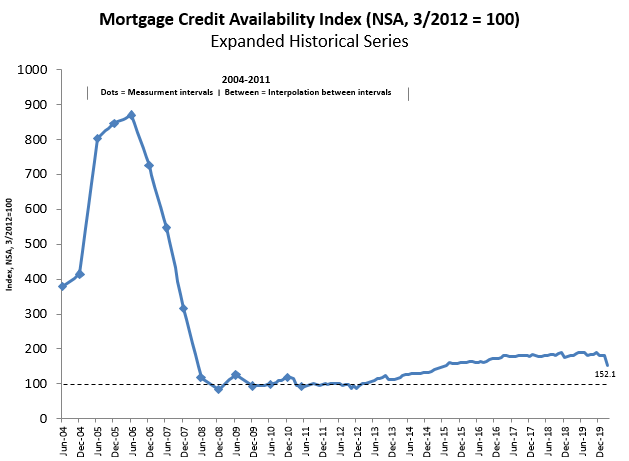