Are you looking for a new way to spend a little of your generational wealth? Have you considered winter hunting? The snow-capped scenery can be gorgeous, and the experience is often peaceful and reinvigorating. Plus, it'll give you a respite from your passive investing and other wealth building activities. Hunting can actually be easier in the winter. There are no mosquitoes, and you can walk across icy lakes and rivers instead of going all the way around. You can also follow animals' footprints in the snow. Below are some enchanting hunting destinations, places that make investing in winter gear well worth it. 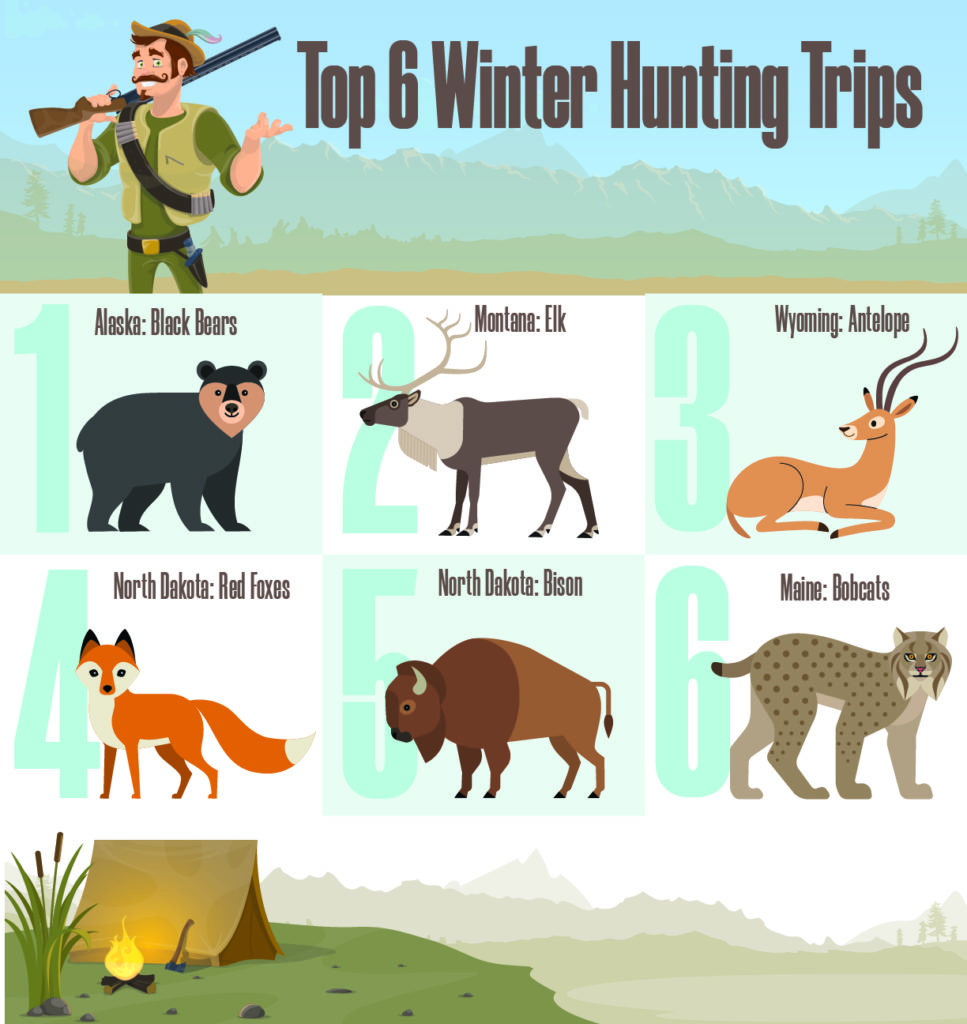 The lynx, a wild cat with a striking black tip on its tail, dwells in Alaska's deep, pristine forests. In fact, it's Alaska's only native cat. The lynx is itself a hunter, favoring the snowshoe hare for its meals. Around Anchorage, the lynx population has grown in recent years, and some residents have had close encounters with these beasts. In the state's southeastern region, however, lynxes are still rare. Thus, that part of Alaska forbids lynx hunting. Black bears are the smallest bears in North America, but they loom large in many hunters' hearts. During the warmer months, these bears are active, often running around and sometimes climbing trees. In the winter, black bears typically rest inside caves and other enclosed spaces.

Often seen traveling in herds, Montana's elk belong to a subspecies called Rocky Mountain elk. Their distinctive antlers are long and intricate. Unfortunately, these elk have posed a threat to many farmers in recent years. Some elk have ruined crops and infected livestock with disease. Thus, hunters play an important role in controlling Montana's elk population. For their part, mountain lions mostly live in western Montana, a region that offers these solitary animals expansive forests. Mountain lions have soulful eyes and elegant bodies, but beware. They're dangerous and best suited for experienced hunters. They frequently kill elk and deer, and they've been known to attack people on occasion.

Wyoming has a wealth of antelope, more than any other U.S. state. The antelope there are pronghorns, animals you'll only find in the western half of North America. They resemble deer, and they have horns rather than antlers. Pronghorns are tan with white patches. In addition, Wyoming is a great hunting destination because, if you'd like, you can enjoy other winter sports while you're there. The state's skiing, ice climbing, and dog sledding opportunities are outstanding. After a visit, you might feel like buying some Wyoming real estate with your generational wealth!

Almost anyplace you go in North Dakota, you'll find coyotes nearby. And they're particularly numerous in the southwestern part of the state. They live in forests, on prairies and hills, and sometimes near cities. Coyotes are closely related to wolves, and they look like smaller versions of their wolf cousins. Indeed, a coyote has a pointed snout and a bushy tail. Coyotes can be tricky to hunt because they're so evasive; their sharp eyesight and sense of smell help them sense approaching danger. You might have more luck at night since these animals are nocturnal. How does a fox hunt sound? North Dakota's red foxes are large and attractive canines. They're abundant throughout the state, but they really love hilly areas. In fact, they prefer making their homes on top of small hills. Red foxes usually live with a mate and raise one litter per year. They hunt alone, however, often feasting on rabbits, mice, and other small animals. Red foxes don't hibernate, so you'll see them roaming around all winter. Like coyotes, they're nocturnal, and they spend much of the night hunting.

North American Bison covered the Great Plains two hundred years ago. Once estimated at approximately 40 million, the North American bison was reduced to about 1,000 by 1890 for its hides and skins. Fortunately, thanks to American sportsman funding conservation efforts, these creatures have been restored in the North American ecosystem. Bison hunts can vary greatly based on a hunter's preferences. Are you wanting a trophy bull hunt or a young cow for more tender meat? Are you longing for a wilderness experience or a ranch style hunt? Are you using a modern rifle or traditional weapons such as bows? After deep deliberation and no matter your selection, bison may be the perfect hunt for you this winter season.

For a special challenge, try hunting bobcats in Maine. They live in thickly forested areas, and they tend to isolate themselves. It can be easier to locate bobcats in the winter as the snow makes it harder for them to find food. As a result, they'll venture a greater distance to get their meals, sometimes coming close to cities and suburban real estate. Bobcats look a great deal like lynxes. They often have a wealth of dark spots or stripes along with a black-tipped tail. Be aware that bobcats are hard to find in northwestern Maine. Therefore, it makes sense to avoid that part of the state during a bobcat hunt. Finally, before hunting in a certain state, don't forget about checking the local regulations and investing in the right licenses. With the proper permits, you can savor an invigorating winter hunt, an icy adventure you'll never forget. Indeed, being able to afford such an experience is a great reason to study passive investing and other wealth building strategies.