Anatomy Of My First Industrial Deal

In 2015, I had a few years of commercial Real Estate investing under my belt. Things were beginning to get competitive and a lot of coastal buyers were coming into the Midwest. I assumed the market was at a peak so I started to sell off my assets to buyers from New York and California. I was going to wait for the next economic downturn to start buying again. As the months went by, I sat on the sidelines and witnessed a lot of residential investors continuing to grow their business. Was I wrong? What were they doing that I wasn’t? Well it turns out that they were still grinding while I was making excuses. For the first time ever, I realized that I had to market myself. It occurred to me that a lot of my friends and family didn’t even know that I was in Real Estate Mentor. I kept seeing posts from residential investors showcasing their deals, their struggles and their successes. I followed their lead and did the same. One post was a video of me clearing shrubs around an office parking lot before the workday started. Another was my kids being dragged into construction sites because there was no one at home to watch them. I put myself out there and brought people into my world. My friends and family quickly learned that I was a commercial Real Estate investor. I also offered to mentor anyone who wanted to learn more about commercial Real Estate. These simple posts snowballed into numerous networking opportunities and long lasting friendships.

Fast forward five years and many deals later. One of my greatest friends, Jason Stanley was an experienced single family investor. He called me to let me know that he found a few industrial buildings going to auction. He informed me that he had been following my posts and was convinced that commercial Real Estate would yield stronger returns. In the same manner that I have helped many others, I offered to help him underwrite these deals and walk him through the process. Because this was an auction, I figured the field would be competitive and the chances of winning were slim. Nonetheless, I gave him a target of what I would want to purchase these buildings for. My numbers were based on published NOI plus a large cushion since we were not privy to inspections. I assumed the worst so I gave Jason a ridiculously low purchase price that he should not exceed. The morning of the auction, he asked me if I wanted to partner on this deal. 100% YES!

As the auction was underway, Jason was at the property nervously bidding on this parcel of three buildings. To our amazement, we won the auction for $150k. These buildings comprise of three tenants and a total of 15k square feet. We acquired the property for $10/ft.

Now it was time to dive into the details and figure out what we just purchased. Prior to the auction, we were given approximate rents, an NOI number and incomplete leases. My underlying thought was for $10/ft, we could afford to make the necessary improvements and re-lease the property if necessary. I called my banker to get him started on the appraisal and loan. While on the phone with him, he looked up the property, noticed the river and asked if it was in a flood plain. My stomach dropped because I should have known better and looked up this information (https://msc.fema.gov/portal/search) prior to bidding. Luckily we are in zone X and would not be required to obtain flood insurance. 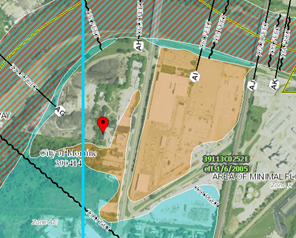 The best we could decipher is that we had two tenants whose leases were expiring in twelve months and one tenant who’s lease would expire in 2024 with 2 rent bumps. These were all gross leases but the tenants were responsible for landscaping and snow removal. The rents are listed below:

All of these rents are well below market. Each of these buildings comprises of a small office area and a warehouse/workshop space with ground floor drive in access. They would be very easy to lease to a variety of tenants. The property is also very close to Interstate 75, making it more appealing.

We immediately wanted to ease any uncertainty that these tenants had. When a business owner’s building is being sold, they are justifiably nervous for a number of reasons. I began to research and found the email addresses of the tenants then sent them an introduction letter and asked if we could meet with them. The next week we met with all of the tenants to let them know that we are full-time and hands on professional landlords and would take good care of them. We found out their pain points and assured them that they were in capable hands. Unfortunately, one of the pain points was a leaky roof, a 12,000 sq foot leaky roof. I suppose this was to be expected and was likely the cause for other investors not bidding as high as we did. Nonetheless, this would be a $60,000 hit to us. Fortunately, the appraised value of this property allowed us to work the roof replacement into our loan. The numbers for this deal are below: 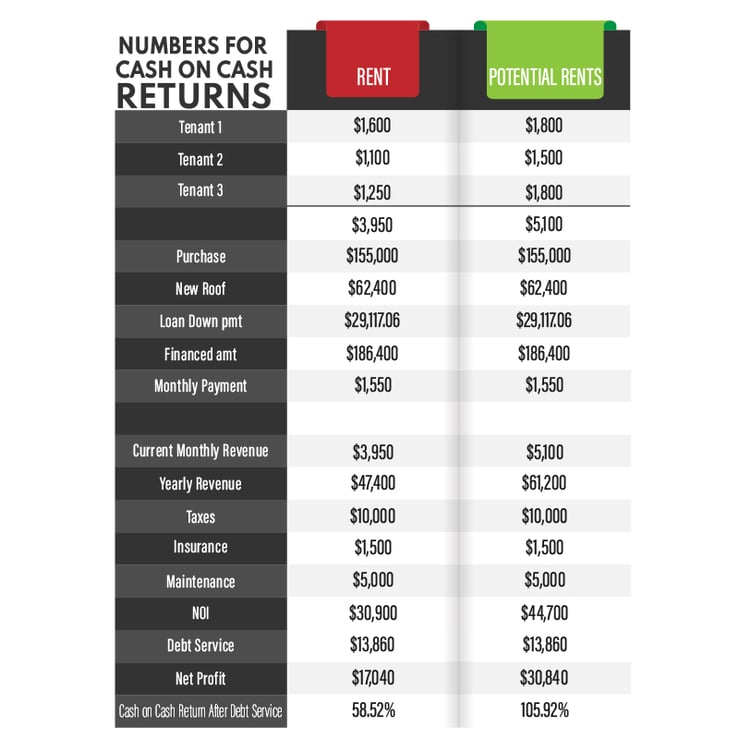 Cash on cash returns are currently 58%. If we can get closer to market rents, the cash on cash return would be over 100%. With increased rents, this parcel would be worth $560,000 at a 8% cap rate. I attribute all of this to putting myself out there and offering to help other investors

Jason and I at closing