In the last year, Ive done a couple of deals with a top residential agent in my area. Her name is Ragan Mckinney and she is an absolute savage with Real Estate.In our conversations, I have been giving her my opinions on the benefits of commercial RE vs residential. Ragan shared with me that she has turned down some very large commercial listings because they were out of her comfort zone. With the tenacity I have seen from her and her team, I know they would crush it in CRE. Ragan would certainly do a better job than the commercial brokers I have worked with in the past. I absolutely did not want her to turn away deals and leave money on the table, so I offered to give her my opinion on any commercial properties that come her way. A short time later, she called me and asked if I had any interest in buying a strip center that she was listing. I asked her to send me the address and any numbers she had.

Due Diligence: It was a strip center about 30 minutes from my house located in a small town and the list price was $489k. I immediately spent hours on my computer researching the building, tenants, traffic counts, previous sales, competition, building owner, township, previous tenants, schools, politics etc. Two of the most costly landlord responsibilities in CRE are roofs and parking lots.Most county auditor sites will have aerial photographs that will allow you to closely examine the roof and parking lot. A short time later, Ragan was able to gather the following rent numbers from the seller: 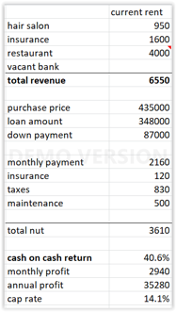 At a 14 cap and 40% annualized return, I am in!All I needed was to review the leases and make sure there were no surprises. I signed a contract which included 45 days for due diligence to review the financials. When I asked for a copy of the leases, I was told there were no leases but all of the businesses have been there for 10+ years. This was not going to work. If these businesses left, the dirt and building are not worth anywhere near $400k. In reality if the restaurant left, I would be left with a 50% vacant strip center with no anchor and two fillers. I began getting little bits of information that made me think this deal was not worth pursuing.I found out that the owner of this building just passed and the son inherited it. The son wants to move out of state and hence the reason for the sale. After I explained the importance of leases, the son drew up simple boilerplate one year leases and had the tenants sign them. The restaurant was actually paying $3000, not $4000. I informed my realtor that the numbers don't work at this price. I wanted to back out of the deal but Ragan convinced me to stay in the game and offer a lower price. I re-worked the numbers and $380k was where I was at. They immediately accepted the deal but told me they needed to be at $383k. Done! The new numbers looked like this: 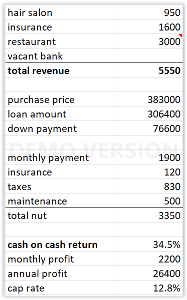 The Twists:
A few days later, Ragan called to inform me that the sellers are rescinding their offer and they were happy to pay for any expenses I incurred. Apparently there was some infighting within their extended family which is not uncommon with inheritance. With commercial RE, this is not how deals work and they cannot simply pay my expenses and send me on my way. She asked me for an official response that she can go back to the sellers with. My response was if they don't show up to the closing table, I would file a multi-million dollar lawsuit. A few days went buy and I researched my options and lined up attorneys. In our purchase contract, we had written in $0 for earnest money which I thought was a win. It turns out that in some states contracts can be invalidated if earnest money is not part of the transaction. Luckily Ohio was not one of them. I began reading case law and found that I would have to prove monetary damages incurred to be successful in a lawsuit. Loss of potential or future income is difficult to prove in court.I concluded that if they did not show up to the closing table, I would have little recourse other than expensive litigation which may or may not go in my favor. After hearing my response, the sellers informed Ragan that they would move forward with the closing.

A Free Restaurant? As I started digging more, I found out that the restaurant operator is brand new. Wait, I was told that restaurant had been there for over 10 years?I later found out that the seller (the Son) was the restaurant operator for many years and had turned the business over to his CPA. Even better, she wanted it to set up her 20 year old son. Let me reiterate that; the seller abruptly gives a viable restaurant away to a lady who decides this would be great for her 20 year old son. I asked if the Son sold the business to her or if he simply gave it to her. It turns out that he literally gave her the business in return for signing a one year lease. I would have felt better if she had purchased the restaurant so she would have skin in the game. With a lease that has no personal guarantee, she could literally run the business down and walk away unscathed. I had to get this lady on the phone and see what else I could find out. My conversation with her was very positive. She owns her own CPA business that she works at during the day and after 4pm she goes to the restaurant and works until close. She is familiar with running restaurants, food costs etc. Her plan is to grow the business for 10 years then hand it off to her son so she could retire. She also shared her plans for growing the business. I felt very comfortable moving forward after this conversation. From a landlords perspective, this is actually a win. I have a fully functioning restaurant in my building that I can sell to an operator if she ever leaves.I also own all of the equipment inside of the building. My goal with her, just like any tenant, is to do everything in my power to make her successful. She has already grown the business by adding local delivery.

Closing: The Seller was an incredibly nice guy and was very gracious at the closing. He explained that the tenants actually pay for their own gas, electric and water, and there were no house meters. Another win! When I inquired about him giving the restaurant away, he explained that he grew up in the food business and he and his wife were just done and ready to move down South. A few days later I went to meet all of the business owners and inform them of the new mailing address for rent. I also wanted to check out the vacant bank space. I took my kids with me and got them excited about being able to go into a bank and checking out the vault. When I walked into the bank, I heard what sounded like a running toilet. As I walked towards the sound, my feet began splashing on the carpet and my heart stopped. As I got closer to the source, the sound was louder and it became apparent that this was a full pressure pipe burst. I opened the closet where the sound was coming from and saw a broken pipe gushing water all over the place. I scrambled to find the main water shutoff and spent the remainder of the weekend remediating the damage. The seller found out about this through Ragan and he and his wife graciously came to help.During this time, I was able to speak with them and get leads on potential tenants for the bank.They also gave me the scoop on city politics and potential developments near this building.

Game Plan: My plan was to call every bank in a 50 mile radius and see if I can get them to move/expand to this location. After the first few calls, I realized that Ragans team would probably be much better suited for this. If I can get just $2000/month from that space, the value of the building will have more than doubled even at a 9% cap rate.