When you attend a haunted house or haunted trail leading up to Halloween, you expect to be frightened – in fact, you want to be filled with fear! That’s because you know that the experience is pretend.

Unlike haunted house, when you attend a property tour at a prospective deal, you typically do not expect to be surprised, let alone terrified. However, every once in a while, you will enter a property and walk away more frightened than you would coming out of even the most intense haunted house.

Here are 10 investors who expected an uneventful property tour but who instead walked into an unmarked haunted house.

1. The Nudist: During Michael Beeman’s strangest property tour, he knocked on the door and was greeted by a screaming naked man. The property was sold through a real estate auction. Michael won the auction with a bid of $7500 – because he was the only bid, which likely had something to do with the screaming nudist. But, the bank decided to hold onto the property in order to sell it at a higher price in the future. 5 months later, the property is still for sale, and the screams of the nudist still echo in Michael’s mind!

2. Bloody Babies: When Jordan Moorhead walked into the living room during a property tour, he was confronted with baby doll heads covered in fake blood strung up on the ceilings.

3. Fried Racoon: While touring a vacant duplex, Chuck Darling approached the furnace in the basement and discovered what looked like a furry towel hanging from one of the panels. Upon further inspection, the towel transformed into a racoon tail, with the remainder of the raccoon, cooked medium rare, inside of the furnace.

4. Adult Cartoonist: During a tour of a multifamily building, Tyson Cross walked into a unit that was covered in little kid cartoons. The weird part was that no children lived there. And the weirdest part was when a grown man walked out of the closet and said “hey, I’m filming in here.” To this day, no one knows why the unit was covered in cartoons or what was being filmed…

5. It’s Hammer Time: Robert Lawry II toured a REO property that had a bloody handprint on the wall. And it wasn’t a prank. It was because someone had been murdered in the unit with a hammer, which explained why the doors and windows were covered in police seals and tape.

6. Wow, What a Hole!: A wholesaler sent Whitney Elkins Hutten a deal and mentioned that there was a hole in the roof. No big deal, right? Well, when Whitney arrived at the property, the hole turned out to be caused by the neighbor’s large tree falling on the home. The damage was so severe that the entire second story needed to be replaced.

7. Scratch and Sniff Cat Picture: Dave Roberts toured a home that was previously inhabited by a cat hoarder. The staple of the home was this beautiful scratch and sniff masterpiece (the picture wasn’t actually the source of the urine and feces smell. That was coming from the carpet below…). 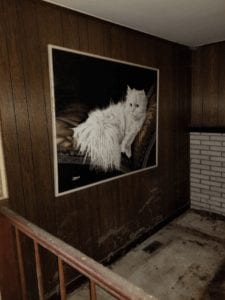 8. Wigs, Masks, and Chalk: At an REO listing, Lisa Rush found a chalk outline of a person who had died in a fire. All of the content remained in the home, including the previous owner’s wig and scary mask collection.

9. Leaning Tower of Feces: I think this picture taken by Colin Smith during a property tour speaks for itself… 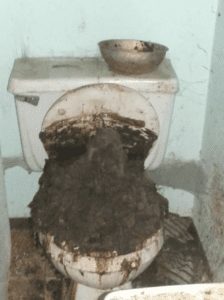 10. Black Cats: Matthew Mesick bought and flipped a house that had over 150 black cats who were terrorizing the neighborhood. It was such an ordeal that it made the local newspaper, which you can see by clicking here.

What about you? Comment below: What was the scariest thing you’ve come across during a property tour?